I made a number of walnut serving trays over the holidays. I wanted them to be simple, circular, and pleasant to the touch:

No build pictures for these. I edge-joined three pieces of walnut together. Then I used a variety of circular shapes – a large plate, a Home Depot 5-gallon bucket, and maybe a few other things – to trace a circle of the right size.

I then cut them with my jigsaw. The circles are not perfect, but that’s OK. I rounded over the edges using the router with a 1/2″ roundover bit, then used a large Forstner bit to drill the finger hold, and rounded over that, too.

I finished them with Tried and True linseed oil and beeswax for a food-safe finish.

A friend wanted a built-in mudroom bench with storage for shoes, jackets, and so on.

Here is the result:

To make the project manageable, I built it in two independent parts — the storage bench, and the upper panel with shelf  and hooks.

The bench begins as a simple plywood box with a center divider:

I then added a frame to the front and sides using poplar:

I then routed a profile on all the rails and stiles:

Once the base of the bench was built, I moved on to the bench top. This was simply two 1″ thick pieces of cherry stock edge joined together:

The front edge is rounded over, and the top is finished with gel stain and satin poly:

With the addition of two adjustable shelves, the bench storage part of the project was complete:

Now onto the upper portion. Similar to the sides of the bench, this was a large sheet of plywood with solid poplar rails and stiles to simulate a frame and panel design. Here it is without the shelf standing behind the bench:

Again, I routed the interiors of the frames with an ogee bit, matching the bench.

I brought both pieces over separately for installation. To build the piece flush to the wall, the first and certainly scariest step was to trim away the existing baseboard molding – after which we were surprised to find no drywall behind it:

I slid the bench into place, leveled it with shims, and secured it to the studs:

We then placed the top on the bench and secured it to the studs:

The bottom was trimmed to the floor with quarter round molding to match the baseboards, and then the whole piece was painted white to match the house’s interior trim color:

It was time to replace the old dresser that served as a TV stand in our living room with something nicer. Inspired by mid-century modern but also modern Japanese construction, with its emphasis on simple, clean lines and little ornamentation, I built one from white oak:

Not too many build pictures of this project. Here it is mostly finished. The panels are rift-sawn white oak plywood, and the frames are quartersawn white oak, all joined using dowels:

Finished with just a couple coats of General Finishes Satin Arm-R-Seal. Here’s a detail of the corner that I like:

I first laid out my tools on a set of old boards that had been mounted to the wall by the house’s previous owner. This was a big step up from not having any system at all:

But after about three years, and accumulating more tools that had no home, it was time to upgrade (chisels were being stored in a cup!). So I set about making a proper tool cabinet.

There are a million tool cabinets online. Ultimately I modeled the construction of mine after Tom McLaughlin’s tool cabinet in this episode of Rough Cut. His was completely enclosed, though, and I knew I wanted a mixture of closed and open space to retain the easy access of my former tool wall. Here was the basic design: 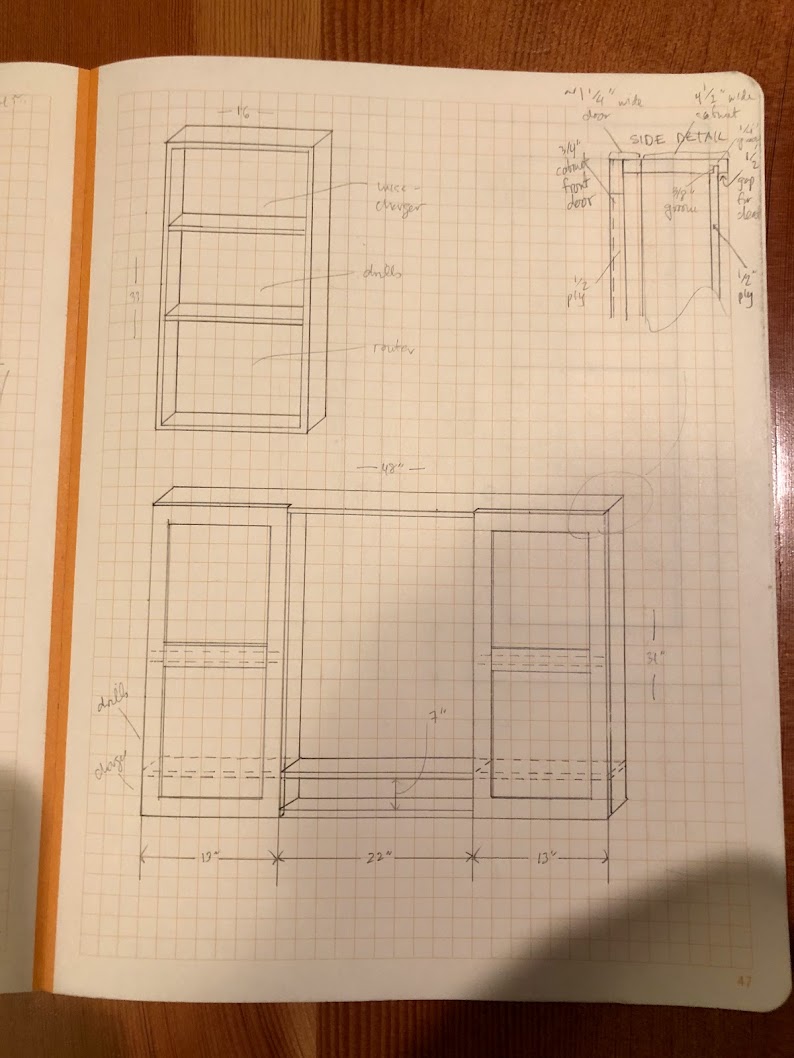 I began by constructing the case, which is made of solid cherry with a 1/2″ cherry ply back. The sides are rabbeted into the top and bottom, and the fixed shelves are dado’ed into the vertical parts. Here are some tools for scale:

For an additional detail, I added walnut pegs at the rabbet joint:

Then onto the doors. I wanted these to be simple frame and panel, for a Shaker look overall. The bottom rail is wider than the middle and top, and I sketched two versions of where the middle rail should go (settling on, well, the middle):

I then built these with solid cherry and plywood panels:

The joinery on the doors is half-lap.  I also added a walnut peg through the half-laps. Finally, I added a cove molding around the top:

I cut the cove molding using the table-saw trick, and was very pleased with the result:

Once the bones were done, it was time to load it up with custom tool holders – for chisels:

and saws, with room to grow:

and the narrow coping saw on the inside of the door:

I thought a lot about ways to keep the cabinet completely flexible (e.g., adding a french cleat system within the center panel, or using an additional temporary piece of plywood), but in the end, decided to go for something fairly fixed. None of the holders is glued in place, though.

I mounted it to the wall using a french cleat:

In the end, I’m happy with how it turned out.

I was tired of digging out table saw blades – particularly the dado set – from under the bench every time I wanted to change them. So I made a cabinet to that lives right next to the saw to hold the most commonly used blades:

The bottom shelf ended up being a convenient place to put the wrenches, too.

This was a quick build with some pine and 1/4″ plywood that I already had. I marked out some 45-degree lines about 2″ apart on the sides:

Then cut these with the dado set and miter fence on the table saw:

I ripped the 1/4″ plywood into strips and inserted them into the slots. The cabinet sides are rabbeted together, and the back is set into grooves.

For a finishing touch, I drove pegs through the rabbeted sides:

And mounted to the wall with a french cleat:

If I were to do it again, I’d make the cabinet a little bit deeper so the blades don’t stick out quite so much. It was actually surprising that it stands up on its own with all the blades in it:

I built a set of modern-looking planters for the front of our house – something a little different from a rectangular box:

I built three of them, and in three different sizes for visual interest:

I was inspired by the simple construction of these tapered cedar planters combined with the appearance of these expensive mahogany ones. I began by creating a jig that would allow me to hold the posts of the planter in place while I laid the cedar strips across:

This ensured that each side was identical, and that each planter was at the same angle even at different heights. I laid each cedar strip (ripped into about 1.5″ strips from inexpensive cedar fence boards from Home Depot) with a spacer between each, and then cut off the ends by hand:

I had some help gluing and nailing the strips in place:

Then I trimmed off the angled ends of the posts:

And finished with a coat of spar polyurethane:

I built wooden seats for a friend’s attractive, but uncomfortable, metal stools.

The seats were made from a single 8′, 6″ wide board of cherry. Joined two pieces together for each square, then traced the stool shape onto that square and cut it out with the jigsaw. Then routed a roundover on both sides.

Finished with Tried-And-True oil and beeswax:

I finally finished my first commissioned piece, and my largest project yet — a mid-century modern dresser.

The case is mitered cherry veneer plywood, and the drawers are solid cherry and poplar. The finish is “Candlelight” gel stain and satin Arm-R-Seal . The knobs are from North Woods Hardware.

It is mitered both on the case joints, for a seamless edge, and on the face frame. Mitering these large pieces accurately was a challenge. I built a large crosscut sled for the table saw just for these miters:

Which produced nice results (here, you can see the edge banding applied to the face miters, while the to-be-joined miters are raw):

I joined them with dowels – yes, dowels – using the DowelMax jig, six on each joint:

The case has two trim pieces: one horizontal piece separating the upper small drawers from the rest, and one vertical piece. These were challenging also in that they are curved, and meet at a curve. I cut this joint by hand:

Here’s where that joint appears:

The drawers are made of poplar. I decided to do these using box joints. Here’s the end result:

And here’s a rather dramatic picture of the unfinished drawer:

Side note: I went ahead and uploaded the following picture of the drawer onto the Wikipedia page for “finger joint“:

All in all, I’m pleased with the result:

This was a fun, quick to build project. It was originally intended for our son to learn wholesome lessons in gardening, but I made it too big, so I gave it to my sister-in-law.

The legs are actually fir I had leftover, and the rest is cedar.

And you can never have too many clamps: